The Deep History Coast is home to the earliest evidence of humans in Britain. A 500,000-year-old flint handaxe was discovered in Happisburgh and the UK’s biggest mammoth skeleton remains were found at West Runton.

The students’ film is split into two parts, with the first part asking members of the public about the Deep History Coast, exploring the area's prehistoric past and interviewing scientists and historians to get a deeper understanding of the ancient footprints, mammoth bones, antlers and skulls that have been found there.

Part two celebrates the coast's ancient and modern communities with a poem written and performed by drama students. 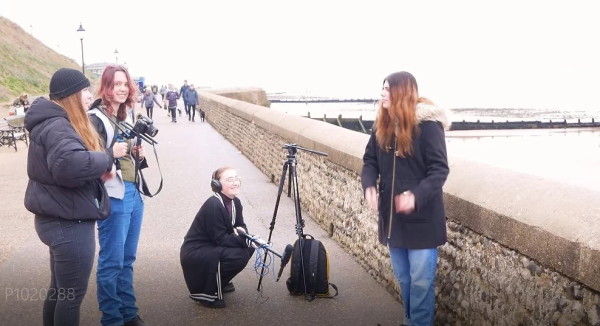 Amy Godden, 17, who helped to direct some of the shots around Cromer, said:

I enjoyed being able to use professional equipment to create appealing shots, as well as learning about how higher quality sound is recorded with an external microphone."

I appreciated how our individual ideas were listened to and we felt that we had a voice on the direction of the project."

While many stories have already been told about this important stretch of East Anglia, the students wanted to communicate their findings differently. Throughout this process students gained valuable real-life experience of being on a film set, as well as the work that goes into the creative process of such a project."

The film, which was commissioned by Norfolk Museum Service's Kick the Dust Project and Creative Collisions, will now find a permanent home in coastal museums around the county.

More information can be found on the website www.deephistoryfilmproject.com.